We have a Guest Post today - A member focus of PCG member 090413425, Michael Brown from Paint Affects. 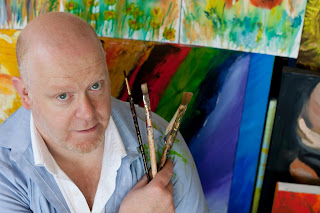 I've always drawn and painted (even before I could walk) and at school I was involved in painting all the back-drops for 2 large stages every time plays were performed. I also ended up painting murals all over our common rooms and corridors during holiday times! So I learnt how to scale work up to a large size very early on. This changed my perception as I realised what appeared to be large daubs coalesced the further you stepped back ! (This was obviously stored away for later use). 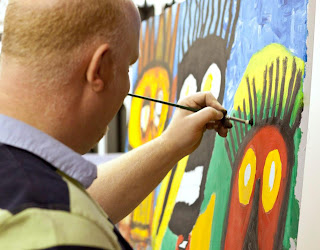 Since then I have worked as a graphic designer (before p.c.) where I learned my craft properly after that I used my skills and talent to work as a mural painter and I also worked with Interior designers creating specialist paint effects for new builds. My customers would either want their children's bedrooms and nurseries painted top to bottom or they would want a sky painted right across a huge ceiling.


During this time I was invited to open a studio near where I lived in a local community centre the only proviso was would I be prepared to tutor community members one night a week? Looking back I think this was the turning point in my painting career as I've met so many artists who are obsessed  with getting their work seen and sold I actually started to realise this wasn't the way forward. The more people who started coming through the doors the more I realised I was helping them not only to draw and paint but also to build their confidence and I actually started modifying my technique in tutoring and painting so much so that my whole approach to painting completely turned itself on its head.

The Tanfield community studio has been running for over 10 years now and is entirely voluntary I take a nominal fee for heat and light. We occasionally obtain funding for equipment but I teach students to make their own stuff and recycle and re-use everything. 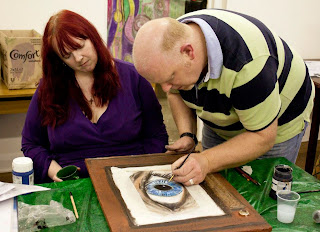 Over the last 15 years I have had various features in local newspapers either for jobs I've been working on or pieces of work I've donated to local charities for fund-raising this has helped them out a great deal and they've always written back and thanked me some of these letters are on my website one painting in particular I donated to a diamond charity event raised around £400 or so but more importantly the guest of honour was H.R.H. the Countess of Wessex and she saw my work so sometimes its not about grubbing about to sell the work I give about 4/5 pieces away every year to charities and I find this more rewarding.

I have also exhibited in quite a few local galleries and have been lucky enough to sell on those occasions, however the galleries take such a large proportion it is not cost effective to use them and I rely on the public visiting my studio direct. This also helps because I don't believe in framing the work as I like the customer to make their own choice, they seem happier with that choice.

My second studio runs out of Glenroyd House in Consett, County Durham. One day I walked into my local D.C.V.S. office and told them what I could do and would they like to make use of me as a volunteer. It didn't take them long to fit my skills and talents to 'local art classes' and we now have nearly 30 people on our books, from the start I think we knew this was going to be the start of something new as Consett is a depressed area and there are a lot of people existng on the fringes of the community who have challenges and it was very much a case of "if you build it they will come". By word of mouth more and more people started coming to the class of all different abilities and life experience. The role of coach or tutor has changed as I've had to learn to take on people with varying challenges in their own lives and they are truly inspirational to work with and again this has had a dramatic effect/affect on my own work as my painting and drawing has become so paired down and de-constructed I am able to paint without any pre-planning. It is completely spontaneous. I try to pass on this method to my students as in my own personal life I've had challenges too! 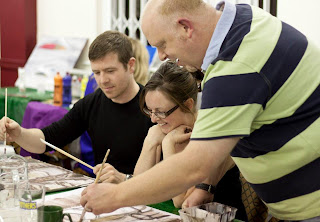 Over the past few years I have been forming a social enterprise which is a largely non-profit organisation and diverts any funding into sourcing resources for the art to keep moving forward. I am not interested in personal greed and I cannot have anything as superficial as money clouding the production of my work. I have had to learn to balance my tutoring and my own painting but this is half the fun, I'm lucky to be able to paint for myself and not allow the aquisition of material objects control my art. 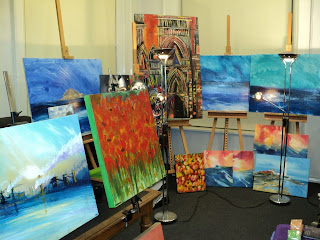 So  to sum up I've been painting for over 30 years

I've been based in the North East I have 2 studio's

I've been featured in several prominent local papers and magazines.

My work has raised a lot of money for charity I have met Newcastle's Lord Mayor for my work.

I've exhibited in local galleries but don't like to.

I have 30 years experience in buying and selling and producing art to exhibition standard.

I walked out on my degrees.

To see more of Mick you can check out his website http://www.redpoppyart.co.uk

You can also find him on Facebook here www.facebook.com/mick.brownartist.3

and here
www.facebook.com/MickBrownArtist
Posted by The Crystal Lady at 10:37 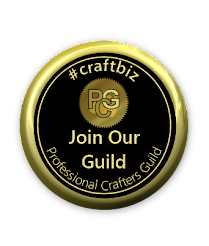 Show the world you mean Business! 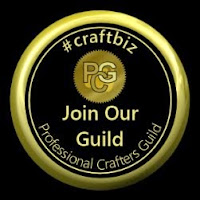